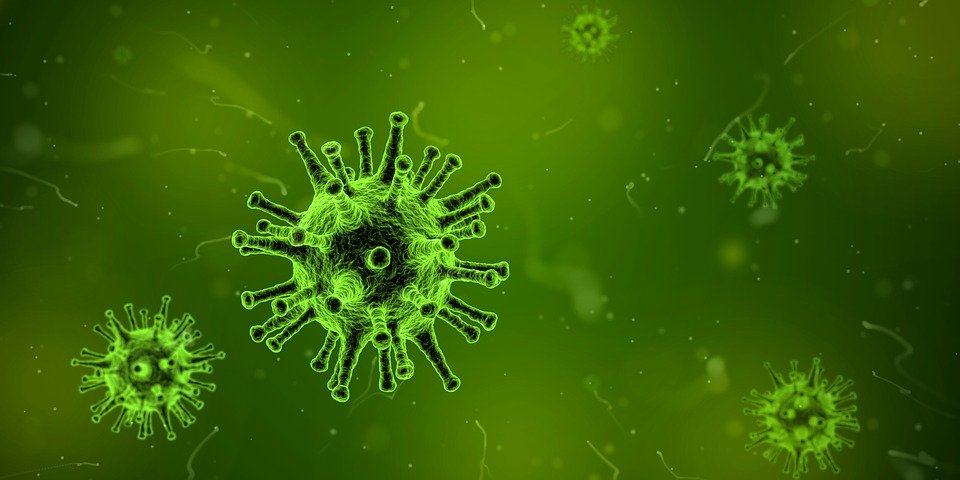 Could It Be SIBO?

What Causes SIBO, Why Is It So Hard To Treat, And
What Are The Effective Treatments?

Normally bacteria are present throughout your entire digestive tract. Their existence and harmonious function within the human body is now recognized by science as a multi-tasking organ called the microbiome. These beneficial bacteria assist in thousands of functions in the body from nutrient synthesis to immune system modulation.

This means that the process of nutrient breakdown is occurring in the wrong place. This causes all sorts of health issues, such a bloating, heartburn, nausea, not to mention the inability to absorb the nutrients consumed. Over time mineral and nutrient deficiencies develop leading to a whole host of conditions.

“The excess bacteria then feed off of the undigested food in your small intestine. In particular, they love to feed on sugar, simple and complex carbohydrates, starches, and alcohol – they’re real carb fiends!

As the bacteria feeds, it causes the carbohydrates to ferment, which produces hydrogen as a byproduct. Hydrogen can in turn feed single-celled organisms in your small intestine called archaea, which then produce methane as a byproduct. So when you have SIBO you have excess levels or hydrogen, methane, or both in your digestive system.

Depending on which gas is most predominantly produced, you can develop different symptoms and respond better to different treatments. Hydrogen-dominant SIBO typically leads to diarrhea, whereas methane-dominant SIBO is usually associated with constipation.” 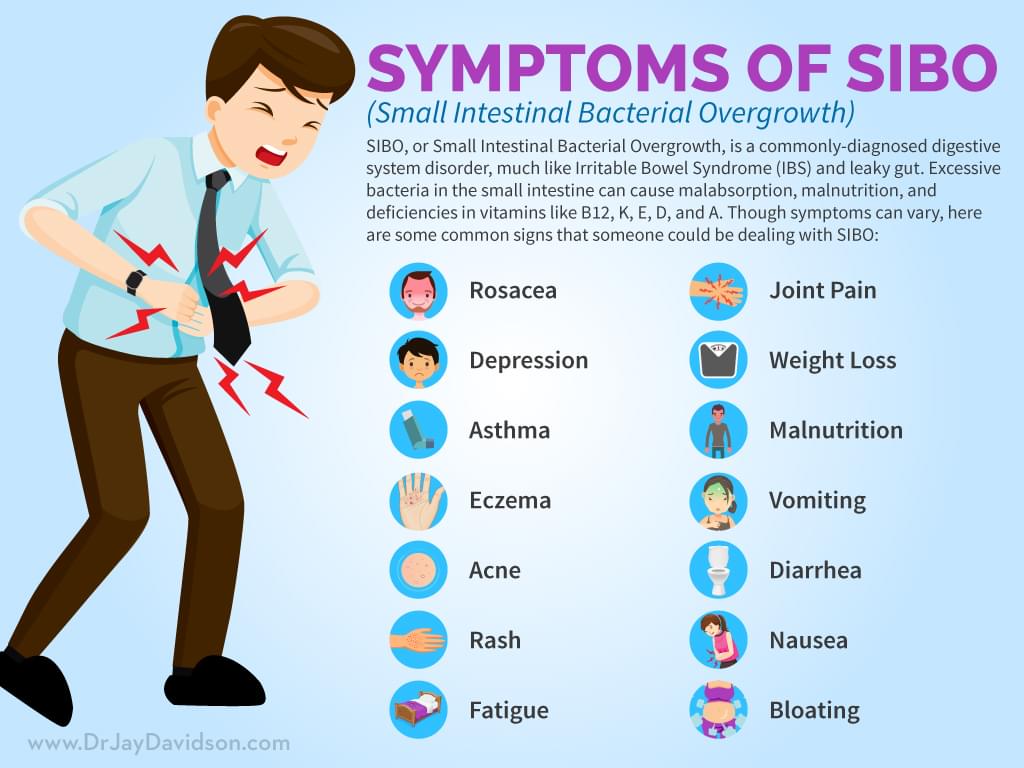 Often the development of SIBO is partnered with fungal Candida overgrowth, IBS, and leaky gut. All these conditions contribute and exasperate one another and their symptoms over lap so it can be difficult to distinguish.

Since your gut is the epicentre of your well-being, if there is an issue in your digestive tract, the symptoms can appear anywhere in the body, from skin issues, mood disorders, and even autoimmune conditions. Dr. Allison Seibecker, leading specialist in SIBO, describes the typical symptoms of SIBO as:

The causes of SIBO are quite complex and there are many risk factors that may accumulate over the years to trigger this condition. Two main factors that play a role in SIBO are your MMC, also known as the migrating motor complex, and your stomach acid levels.

1. The Malfunction Of Your Migrating Motor Complex (MMR)

The migrating motor complex is a form of peristalsis in small intestines. It’s purpose is to clear the small intestines of bacteria and left over food. It functions when you are fasting and sleeping. After you eat it’s the “housekeeping wave” that clears the upper digestive tract of cellular debris.

A number of things cause your MMC to malfunction including diabetes, hypothyroid, pharmaceutical drugs such as opiode pain killers, and even food poisoning from a bacteria. Car accidents, surgery, abnormal anatomy, adhesions to small intestines can also prevent the normal flow movement of bacteria through the small intestines.

According to Dr. Allison Seibecker’s research and on-going practice, the most common cause for the slowing of your MMC are opiates. A slow MMS allows for a build up of bacteria to grow in the small intestines.

The second cause for a sluggish MMC is pathogenic bacteria that secrete CDT toxin. A portion of this toxin looks like a protein on the nerve cells of the MMC. Through molecular mimicry an autoimmune reaction occurs as your immune system is triggered to fight against the nerve cells of your migrating motor complex.

Food poisoning and bacterial gastroenteritis, also known as the stomach flu, can create fertile grounds for SIBO, or “post infectious IBS.” If you can recall a time you had a bad stomach bug and your digestion has never been the same, you may be experiencing SIBO.

2. Inadequate Gastric Acid Secretion
Maintaining an acidic environment in your stomach is your #1 prevention system against bacterial infections and conditions like SIBO. Low stomach acid causes bacteria and fungus to grow in the upper portion of the digestive system and in turn Candida, Clostridia, H.pylori, and other parasites in the stomach secrete toxins that can further stunt stomach acid secretion as a survival mechanism.

Today, an estimate 90% of Americans produce too LITTLE stomach acid! The condition is called Hyprochlorhydria.

Stomach acid with a pH ranging from 0.8 – 3.0 plays a key role in sterilizing the food you killing pathogenic opportunistic pathogens like Helicobacter pylori, Campylobacterpylori, Enterobacteria, Candida yeast, Salmonella, E.coli., and Streptococci. An overgrowth of these species can cause the above mentioned SIBO symptoms while also contributing to the development of stomach cancer, ulcers, and gastritis.   Adequate gastric acid secretion helps to keep their numbers in check preventing their proliferation in the the stomach and gut lining.

A proper acidic environment in the stomach also activates the release of bile and enzymes that continue to kill and prevent bacteria from inhabiting the small intestines. If you have had your gall bladder removed you may be at risk for developing SIBO.

If you have a history using proton pump inhibitors, stomach acid blocking medications that prevent the production of hydrochloric acid (stomach acid), you are also at risk of developing SIBO.

To learn if you have low stomach acid and how to heal this issue continue on to this previous article: 10 Ways To Heal Low Stomach Acid

SIBO is largely under-diagnosed because most doctors aren’t aware of it. Many people don’t seek medical care for their SIBO symptoms, and testing for SIBO has proven to be difficult. Even the go-to breath test which measure levels of hydrogen and methane gas often gives false negatives.

“Unfortunately there is no perfect test. The small intestine (SI) is a hard place to get to. If we want to see or sample the SI, endoscopy only reaches into the top portion, and colonoscopy only reaches into the end portion. The middle portion, which is substantial (about 17 feet) is not accessible, other than by surgery. And stool testing predominantly reflects the large intestine (LI). Luckily, there is a non-invasive test which is commonly used in SIBO research; the Hydrogen & Methane Breath Test. Additionally there is a blood test validated to diagnose SIBO from food poisoning, otherwise known as Post-Infectious IBS.” – Dr. Allison Seibecker

SIBO Breath Test
This is a 3 hour procedure that tests for overgrowth of bacteria in the small intestine measuring levels of hydrogen and methane.

Checking for IBS, Irritable Bowel Syndrome
You can do a blood test that checks for antibodies for CDT-B and the protein on the nerve cells with Quest and Commonwealth Lab.

A Test For Leaky Gut
Cyrex Labs test, Cyrex Array 2, screens for a molecule called LPS, lipopolysaccharide. LPS is an endotoxin, a toxin that comes from within a pathogenic bacteria such as H pylori E. coli, and Salmonella, which induces an extreme inflammatory response in humans. Normally LPS is blocked from entering the blood in a health digestive system. If you have leaky gut, this toxin makes it into your bloodstream. High levels of LPS indicate a leaky gut, bacterial overgrowth, and severe systemic inflammation in the body.

Our 4 week SIBO treatment pack has everything you need to treat SIBO safely and naturally at home.

NEEM BACTERIAL CLEANSE
Accompanying the Berbacin Complex are capsules of our Neem Bacterial Cleanse. Neem is scientifically proven to enhance the effectiveness of both Berberine and Allicin in removing SIBO bacteria. This makes it a vital part of the treatment package to ensure the best result with Berbacin Complex.

Combining these two scientifically proven herbal extracts creates a formula that many studies have found to be MORE effective than prescription antibiotics in treating SIBO infection.

Learn more about the SIBO Treatment and get started on your protocol today: SIBO Cleanse and Treatment Instructions 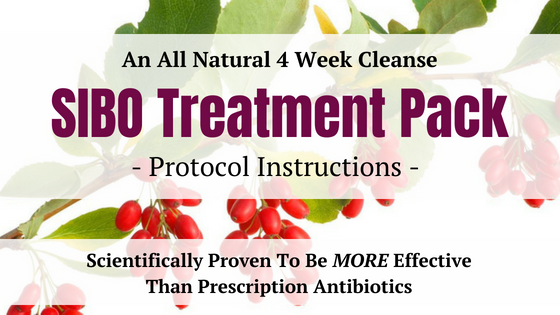 Eat smaller meals, filling up the stomach and having large amounts of food sit int eh digestive system can aggravate the condition. Longer periods between meals, fasting, and intermittent fasting to allow for the migrating motor complex to move food, derbis, and bacteria through the small intestines.

SHOULD YOU USE ANTIBIOTICS?
Antibiotics are often used to treat SIBO, Rifaximin is the most common. However, studies show that despite treatment with antibiotics, recurrence develops in almost half of all patients within one year.

Botanical antimicrobials, such as Neem and Berbaine, show better outcomes than pharmaceutical antibiotics. Researchers have even found that herbal remedies such as these are as effective as 3 courses of antibiotic therapy in patients who don’t respond well to Rifaximin.

PROKINETICS
If you learn that you have a slow moving MMC, Dr. Allison Seibecker recommends Prokinetics. This as a motility agent is used to stimulate MMC in the small intestines, it doesn’t stimulate bowel movements.